The year 2018 was the centenary year of the passing away of Mrinalini Devi, wife of Sri Aurobindo. There is very little known about her except that Sri Aurobindo chose her as his earthly consort. Here are a few details taken from different sources which gives us a glimpse of an important but unsung hero of Sri Aurobindo’s life.

(The following text has been taken from ‘A Talk on the Occasion Of Mrinalini Devi’ Birth Centenary’ by Nirodbaran, the personal physician and scribe of Sri Aurobindo, and senior member of the Sri Aurobindo Ashram.) 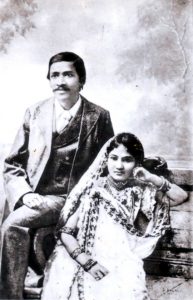 “Daughter of a respectable Hindu family, Mrinalini Devi was 14 years younger than Sri Aurobindo. Her father, one of the early batches of England-returned Bengalis, held a high Government post in the Shillong Agricultural Department. He was a very fine gentleman. He once met Sri Aurobindo’s father. Mrinalini was the eldest of his children. Of a fair complexion, a rosy hue seemed to be reflected from it. Her graceful face was framed by a rich crop of dark curls. The palms of her hands and the soles of her feet had a ruddy tint like those of new-born children as if she had smeared āltā. In her early days her friends used to tell her that her hands were stuffed with cotton. Feeling hurt at such odd remarks, she would complain to her uncle, “Do buy me a good pair of hands.” So simple she was! Sri Aurobindo’s hands too were soft and warm like the downy feathers of birds. She was sent to a Calcutta Brahmo Girls’ School for studies and there contracted a life-long friendship with one Sudhira Bose whose brother belonged to Sri Aurobindo’s revolutionary party and later joined the Ramakrishna Mission as a sannyasi. Girish Chandra Bose, a very intimate friend of Mrinalini’s father, almost like an elder brother, used to look after Mrinalini in Calcutta. He was the Principal of a famous college there. It was he who arranged the marriage of Mrinalini with Sri Aurobindo in a most unorthodox manner.

Sri Aurobindo, as you know, had returned to India and taken up a job in Baroda. “When, after about 7 years of service, he had become the Vice-Principal of the college in that city, he decided to marry. He was then 29 years of age. He had put an advertisement in a Calcutta paper that he would marry a girl of a Hindu family according to Hindu rites. He had already become a name in Calcutta.

The advertisement caught the attention of Girish Bose. He found that the conditions stipulated would suit Mrinalini admirably. He at once negotiated the marriage. Sri Aurobindo came to see the prospective bride and at one single glance made his choice, though there were a number of high-born maidens on the waiting list eager for the coveted prize. The marriage ceremony took place according to Hindu rites and was attended by eminent persons like J. C. Bose, Lord Sinha, etc., but none from Sri Aurobindo’s paternal or maternal side. His maternal relations were of Brahmo society.

Mrinalini, at 14, was married like Sati to Shiva, but had no idea about it. Her entire married life of 18 years was practically passed alone. Her husband was plunged in political work, later in deep meditation on the Supreme in the far South while the wife exiled from him in the North-East lived meditating on him, her single thought dwelling upon her Shiva who had made her his companion, but who could not give her company nor any safe refuge of her own. Her husband had heard the call of the Supermind and was to bring it down on earth, while she for 8 long years passed her days of lonely sorrow in the hope that one day she would be called to his side.”

Mrinalini had to go through all the joys and sorrows which are the lot of one who marries a sage, a human light and someone so out of the ordinary as Sri Aurobindo.

Mrinalini Devi: A Life of Solitude

(Article edited from an original by Dr Kavita Sharma)

Mrinalini Devi’s eighteen years of her marriage were mostly spent in solitude. After Sri Aurobindo’s arrest in 1907, and although he was released a year later, Mrinalini experienced the dark night of the soul when she felt that she “couldn’t call even God” because she “had no other God” except her husband. She had “seen God’s manifestation in him alone.” A life of abandonment and loneliness seemed to be her destiny, but at that moment Sudhira (her friend from school) took her to Ramakrishna Ashram and Mrinalini began to frequent it from that time onwards. She was of course a well-known entity as Sri Aurobindo’s wife but she kept herself as simple and aloof as she could. Sarada Mata, Swami Ramakrishna Paramhansa’s wife, who came to love her as a mother deeply assured her that Sri Aurobindo would be proved innocent but he would not lead a worldly life.

After his release from the prison Sri Aurobindo left for Pondicherry unknown to everyone, including Mrinalini. The eight years that followed could have been extremely dark days for her, but Mrinalini Devi transformed her suffering into a sadhana, to become a ‘heavenly being’ in the words of Sarada Mata, to whom she turned during this period. Mrinalini’s father took her away to Shillong, where she steeped her life in austere tapasya. She ate simple vegetarian food and always dressed humbly, looking like a yogin. Every early morning, after her bath she would pluck flowers from the garden and then go to her Puja room which had beautifully decorated pictures of Kali, Sri Vivekananda and Sarada Mata together with that of Sri Aurobindo to whom she offered flowers and incense. She would meditate there for hours and then spend the day reading religious books mainly of Vivekananda and Sri Ramakrishna. In the evening, too, she meditated alone for hours. Letters arrived sporadically from Sri Aurobindo and enlivened her spirits. Despite their separation, she felt an inner bond with Sri Aurobindo and never ceased to hope that she would be united with him. At last when it became a possibility in December 1918, death intervened. The mental agony that she had suppressed for years exploded during the delirium of her illness, especially the nightmarish experience of the night of Sri Aurobindo’s arrest when she had been with him. The otherwise still and detached Sri Aurobindo, too, on hearing the news of Mrinalini’s death, was moved to tears. 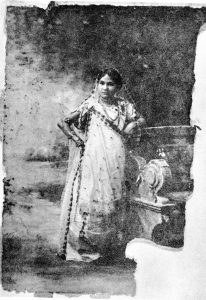 It is remarkable that Mrinalini sold many of her ornaments during her lifetime to contribute to charitable causes. Her last wishes were that the remaining ones were to be kept in her friend Sudhira’s custody to be sold and a scholarship instituted for a poor girl students of the Nivedita Girls School with Sri Aurobindo’s approval.

Mrinalini Devi deserves to be remembered as a model of courage, who overcame impossible odds to find deep meaning in her life; a flower that blossomed unseen but left its everlasting fragrance.

The Last Days of Mrinalini Devi

(The following translated excerpts have been taken from the reminiscences of Shaibalini Mitra, Mrinalini Devi’s younger sister.)

“At last arrived the year 1918, December. She [Mrinalini Devi] received the call from Sri Aurobindo, saying, “My sadhana is over. I have achieved my object, siddhi. I have a lot of work to do for the world. You can come now and be my companion in this work.” This naturally made Mrinalini and all others extremely happy.

Now our father thought of taking my sister to Pondicherry. The Government gave permission. So they arrived in Calcutta via Ranchi. But Mrinalini fell a victim to the scourge of influenza which was raging everywhere. After a week’s illness she passed away on 17 December at the age of 32. The mental agony that she had kept suppressed for years exploded during the illness in her delirium, particularly the frightful nightmarish scene of Sri Aurobindo’s arrest.

There was a mention in her horoscope that her 32nd year would be critical. Sri Aurobindo knew it and wanted us to remind him about it when she would be 32. But all of us forgot except my mother. She was at that time in Ranchi. Hearing about the illness she hastened to Calcutta but Mrinalini Devi passed away within half an hour of her arrival. When she learnt that we had not informed Sri Aurobindo, a telegram was sent to him. On reading it, Sri Aurobindo said, “Too late!” My cousin who was there at the time wrote to my mother: “Today I saw tears in the eyes of your stone-hearted son-in-law. With the telegram in one hand, he sat still and tears were in his eyes.” Sri Aurobindo told him too that Mrinalini’s soul had come to him soon after her death. Also a photo of Mrinalini Devi that was on the mantel-piece is said to have fallen.

In the evening after Mrinalini’s expiry Sudhira took my mother to Sri Sarada Devi. She was at that time in deep meditation. When she opened her eyes and saw them, she said, “You have come? I was seeing in my vision my daughter-in-law, Mrinalini. She was a goddess born as your daughter in consequence of a curse. Now that her karma is exhausted her soul has departed.” 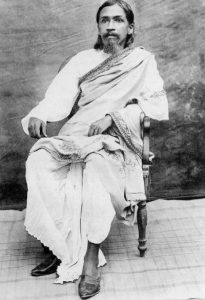 I have not written to you with regard to this fatal event in both our lives; words are useless in face of the feelings it has caused, if even they can ever express our deepest emotions. God has seen good to lay upon me the one sorrow that could still touch me to the centre. He knows better than ourselves what is best for each of us, and now that the first sense of the irreparable has passed, I can bow with submission to His divine purpose. The physical tie between us is, as you say, severed; but the tie of affection subsists for me. Where I have once loved, I do not cease from loving. Besides she who was the cause of it, still is near though not visible to our physical vision.

It is needless to say much about the matters of which you write in your letter. I approve of everything that you propose. Whatever Mrinalini would have desired, should be done, and I have no doubt this is what she would have approved of. I consent to the chudis [gold bangles] being kept by her mother; but I should be glad if you would send me two or three of her books, especially if there are any in which her name is written. I have only of her her letters and a photograph.